Using a Drone for Roof Inspections: Costs and Benefits

Drones used to be used only by hobby enthusiasts and the military, but increasingly, businesses are using drones to make their jobs easier and safer. One area where drone use has skyrocketed is in the area of roof inspections. Drone use in the roof inspection process has changed the roofing industry dramatically. Here is some information about drone use in roofing, the cost of drone use, and why using drones for roof inspections benefits customers and roofing companies.

Drones, which are also known as unmanned aerial vehicles, are aircraft. Like all aircraft, they can land and takeoff from one location to another. Drones do not have a pilot in them; instead, they are controlled by a pilot on the ground using Wi-Fi communication. The person on the ground steers and lands the drone. Drones can take pictures and videos while they are up in the air.

Drones have been used for a variety of purposes. During natural disasters, drones have been used to survey the damage and look for people who need help. Using a drone during a natural disaster such as a hurricane or a flood is safer than having people go door to door to conduct surveys and welfare checks. Drones are often used in situations where it would be dangerous to send a human in–such as government surveys in treacherous terrain. Drones are also used to transport small items–such as medicine–during rescue situations or where roads are nonexistent or impassible.

Why Would You Need to Use Drones for a Roof Inspection?

There are several reasons drones might be used for a roof inspection. One of the biggest reasons drones are used in the roofing industry is because of safety. Roofing is a very dangerous job. In fact, over 150,000 injuries each year in the United States happen on a roof, according to the CDC. Over 15,000 of those roofing accidents involve serious injuries or deaths. As a homeowner, the last thing you want is someone falling off your roof while doing a roof inspection or roof repair. While roofing companies carry their own insurance, companies don’t want their employees falling off a roof any more than you do.

With drones, companies can safely conduct roof surveys while they remain on the ground. Roofing companies can use drones to take measurements, pictures, and video. All of this information helps roofing companies determine if you need a new roof or a roof repair. Drones can also check chimneys, chimney caps, and large HVAC systems or spot roof leaks. Drones fill a great space for roofing companies. Drones take high-quality photos and videos to aid roofing companies in their inspections. Drones are able to zoom into a problem area and zoom out as well to get a great look at your entire roof.

Drones also save time and money for businesses and homeowners. Instead of having roofing company employees do a service call and spend hours investigating a leak, drones can be used, even on the largest buildings, to do a roof inspection.

In addition, drones have been used to measure precisely the dimensions of any roofing project, large or small. Often, drones can measure more accurately than humans, especially in areas where meticulousness is so important. In roofing, precise measurements are important because roofing companies must order materials and supplies for any roofing job. Precise measurements mean less material that needs to be ordered and less waste. 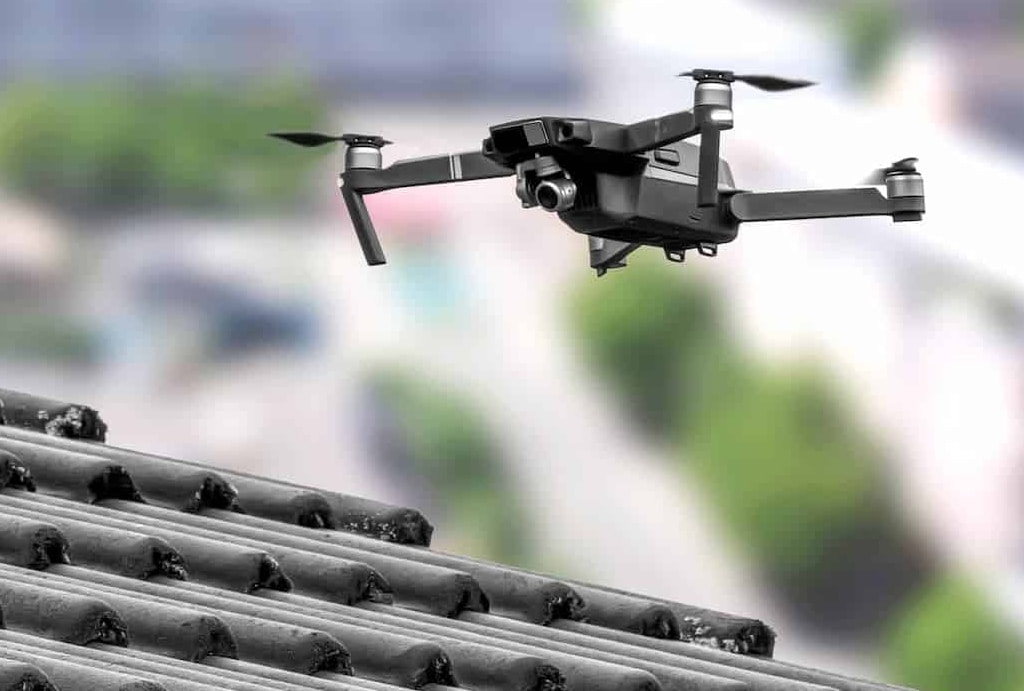 What Are The Costs Of Using A Drone? Are There Any Drawbacks?

There are costs associated with drones. First, there’s the cost of the drone itself. A good commercial drone with photo and video capabilities can cost a business $10,000. Also, commercial drones have to have a license to fly. The FAA (Federal Aviation Administration) requires all commercial drone operators to get a license, which means they have to pass an examination. Many drone pilots went to school or took classes to become certified to fly drones. Depending on how much time and expertise is involved, drone licensing can be expensive.

Also, drones can’t fly forever. Even the best drones can break down over time and need to be repaired or replaced. Basic drone repairs can run between $200 and $600 depending on the type of drone and the size of the drone.

There are some drawbacks to using drones. First, drones are only as good as the person that is flying them. If you have an experienced drone pilot, your data from the drone should be more accurate than if you use an inexperienced drone pilot. Also, drones can’t measure anything from inside the house. If a homeowner has a roof leak, for example, sometimes the only way to diagnose the problem is to eyeball it from inside the house.

Usually, drone inspections are more costly than a typical roof inspection, which is a drawback for some homeowners or businesses. While having a human do a roof inspection costs less, that doesn’t mean it will be as accurate as a drone roof inspection.

Also, there are areas of the country where drones aren’t allowed to fly. Companies that fly drones have to adhere to state, local, and FAA regulations, which are always changing. For example, there are times the FAA imposes a no-fly zone in a particular area–which means nothing that flies can be in the airspace for a specific amount of time. Usually, this happens when there is a major event in the area, such as a presidential visit, or a major sporting event, such as the Super Bowl.

While drones are amazing, they won’t be able to fly in any weather conditions, either. Drones can fly during sunny weather or if the weather is cloudy. However, fog will ground drones the same way it can ground aircraft. Ice, freezing rain, thunderstorms, and heavy snow will also ground drones.

Drones have become an indispensable part of many roofing businesses. They make roof inspections easier, safer, and cost-effective. Drones are able to spot trouble on a roof and take extremely accurate measurements. Drones are perfect to use for roof inspections on homes and businesses. However, drones can’t replace humans. In some cases, you will need a human to take a look at a roofing problem in order to problem solve it and come up with a great solution for your roofing issues.