What is the Roof Replacement Process?

Why Choose Roof Replacement In Indianapolis?

When we think of the need for roof replacement, we’re apt to think of high winds or some other dramatic weather event or accident destroying the old one. But the fact of the matter is, no roof lasts forever. Even the best ones deteriorate over time, and that means that eventually, everyone needs a new roof. 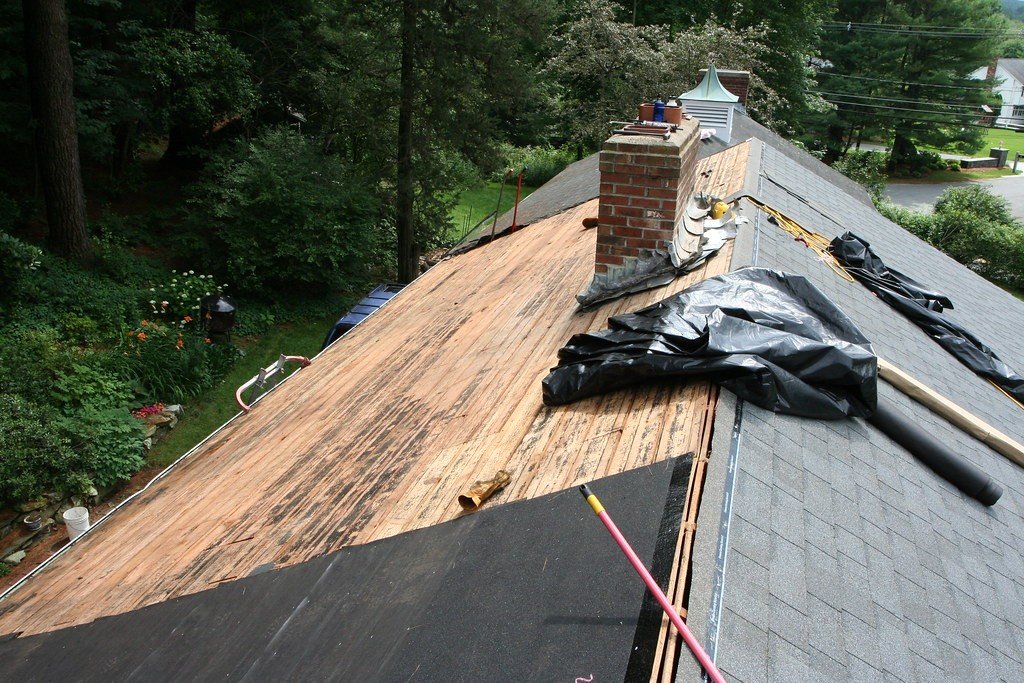 When it’s time for a new roof, you’ll have to decide what company is going to do the job. Before settling on one, it’s a good idea to get several quotes from several companies that are licensed, local, and have good reviews online. You want to get the best bargain on your roof replacement cost than you can so long as it’s coming from a reputable, professional outfit.

Roof Replacement: Out with the Old

Before your roof replacement company of choice can put on a new roof, the workers generally have to get rid of the old one. (The exception is discussed below.)

If you have shingles, they’ll pry them loose with a tool called a shingle fork.

In the case of a metal roof, the workers remove it panel by panel using a full-size pry bar or perhaps a drill if the screws aren’t too weathered to make this impractical.

Once the top layer is gone, workers inspect the flashing, the aluminum or galvanized steel that prevents water from seeping through joints. It protects the roof’s chimney, valleys, and vents with different sorts of flashing in different areas. Chimneys, for example, need step and counter flashing.

Flashing sees a lot of hard use, and it’s likely the inspection will reveal that parts of it are rusty and cracked. But if the flashing is in good shape, it can stay. Otherwise, the workers will replace it with modern flashing and seal their handiwork.

A coating of roofing cement on the edges of flashing helps keep water out.

It’s particularly important to have good flashing underneath the roofing covering the valleys, if any, on your roof. You really need it here to send water off the roof and into the gutter system.

Even a well laid roof lets a little water seep through its surface layer. The underlayment’s job is to keep this water from penetrating any deeper. It catches and sheds the water to prevent it from rotting the sheathing and framing underneath.

Before the underlayment proper goes down, the roofers install an ice and water barrier. They tuck it under the drip edge and then nail it down securely. The underlayment’s rows overlap to maximize protection.

In certain cases, rather than go through the steps above, a homeowner may opt to put on a new roof consisting of a new layer of shingles on top of an old one. That’s assuming this alternative is allowed in the homeowner’s jurisdiction; it isn’t always.

When you put on a new roof with layering, you reduce the work involved. This isn’t much of a consideration for professional roofers, who can generally dispose of an old roof in a morning, but it can be more important for do-it-yourselfers.

Layering has two disadvantages that may make a professional roofing company advise against and that contribute to it not being permitted in certain localities.

One is that layer upon layer of shingles is heavy. A triple layer of asphalt shingles weighs as much as a single layer of slate shingles, which are quite heavy. Piling on too much weight can result in too much stress on the structures that support the roof and damage them. This is especially prone to happen in older houses.

The other problem is telegraphing. The new layer of shingles follows any irregularities present underneath, and if bumps, waves, and bubbles contributed to your decision to put on a new roof, there’s a fair chance you’ll end up with them again, and your roof will look unattractive as a result. Correcting as many problems with the old layer as possible before putting on the new shingles may prevent or at least minimize flaws in the new roof’s appearance.

After all the preparation, it’s time to install the new roof itself. The roof replacement process varies somewhat depending on the type of roof you decided on. There are a number of types available. You may make your selection based on cost, overall durability, fire resistance, appearance, a desire to have your home blend in well with other houses in the neighborhood, suitability for the essential shape of your roof, or some other factor. These are some of the roofs that are available:

As you’d expect, each type of roofing material requires a somewhat different method of installation. Here are two examples:

Workers replacing roof shingles will use starter shingles at the bottom and sides. The nails go in just under the tar strips on the shingles, and staggered rows protect against leaks.

When installing a metal roof, the workers will be careful to get everything square and then start screwing the new roof down by going up the vertical edge. They’ll put the screws into the ridges, never the flats, and as a result, the roof will go on flatter and the screws will be better protected from pooling water. This method also helps to keep water away from the fasteners. Screws with rubber washers yield the most satisfactory results.

That’s all a lot to take in, but at Stay Dry Roofing, we can answer all your questions about roof replacement and put on a new roof anywhere in the Indianapolis area. Check our reviews and references online, get a quote on our site, or give us a call. We’ll do a skilled, professional job at an affordable price.