Is Snow and Ice on Your Roof Dangerous?

Extreme winter weather is bad for people but is also poses a serious risk for your roofing system as the risk of snow and ice accumulation grows the deeper into a brutal winter we get. Roof care for the winter months is critical to keeping your roof in good shape all year round. It is also the biggest contributing factor to prevent roof damage and roof collapse due to snow and ice accumulation. “Snow and ice can collapse roofs, especially on older buildings. Older buildings have a greater risk of corrosion, which can weaken its structural integrity. Newer buildings that have roofs made of light-weight metal, roofs that are flat, or roofs that do not have a lot of supports are more likely to give-in under the pressure of excess snow and ice. Snow drifts on a flat roof that have projections, a lower roof, or other equipment can accumulate snow that has drifted with the wind. This can cause vulnerability unless additional strengthening supports are added. One should contact a professional about safely removing excess snow and ice from a roof” (Polygon Group). 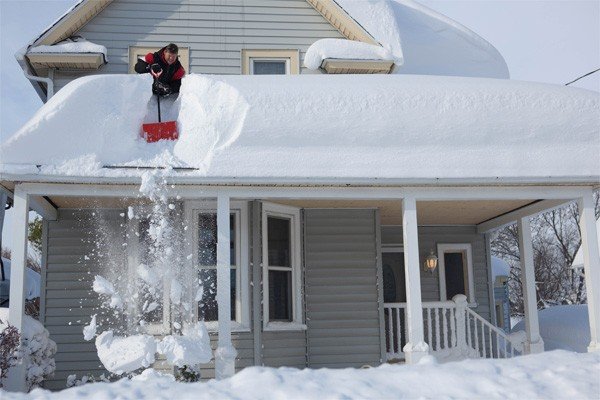 Prepare Before the Snow and Ice Hits

“There is a complex interaction among the amount of heat loss from a house, snow cover and outside temperatures that leads to ice dam formation. For ice dams to form there must be snow on the roof, and, at the same time, higher portions of the roof’s outside surface must be above 32 degrees F while lower surfaces are below 32…The snow on a roof surface that is above 32 will melt. As water flows down the roof it reaches the portion of the roof that is below 32 and freezes…The dam grows as it is fed by the melting snow above it, but it will limit itself to the portions of the roof that are on the average below 32” (University of Minnesota Extension).

You can make sure your roof is in the best shape possible to handle the snow and ice that is coming by inspecting it now and taking care of any damage or issue before winter hits. To help keep ice off roofs that are sloped, and to reduce the rate at which the ice accumulates on the roof, it is important to make sure attics are well ventilated so the snow won’t melt and refreeze as ice. When the attic isn’t properly ventilated the hot air of the home accumulates and causes the melting and freezing that creates dangerous ice dams. Melted snow and ice can enter a roof via the eaves and flat roofs can experience water damage if ice dams form and prevent water from flowing into drains on a roof. Gutters can also fill with snow and melt that refreezes into ice which can weigh down the eves and cause problems when the weight load gets too heavy. Preventative maintenance is crucial during the winter months to help avoid costly repairs and one of the biggest examples of the risk of snow and ice accumulation that exists is the sheer weight that can accumulate on the roof! 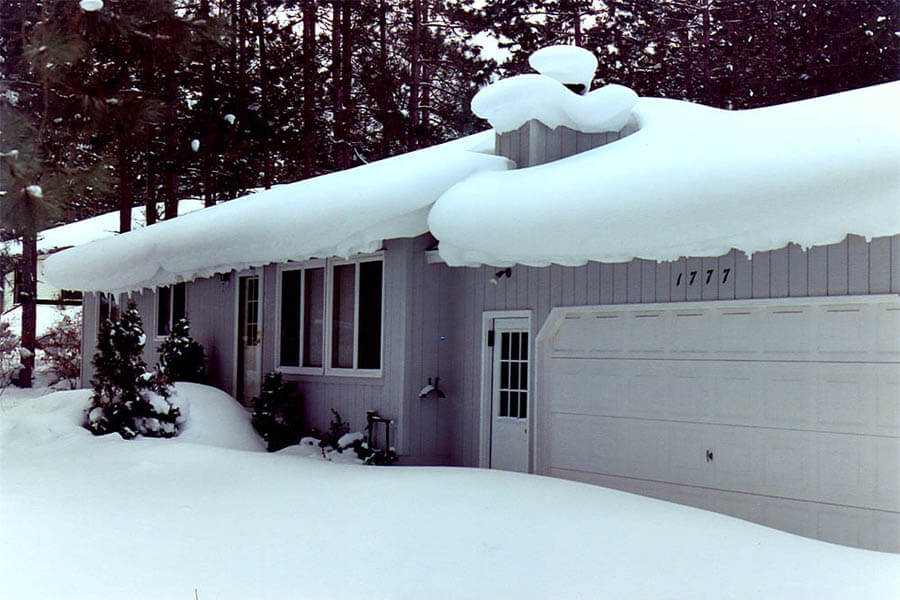 Estimate How Much Weight Your Roof Can Support

Snow may seem light and fluffy, but if you have ever been trapped under snow or have sunk to your waist in a snow drift than you know how heavy it can be. Now think about 5-10 feet of that sitting on your roof after a few months of weekly snow storms and snowfall. It is easy to see how the weight can get a bit excessive, but just how heavy can it get? Here are some figures to help put it in perspective: 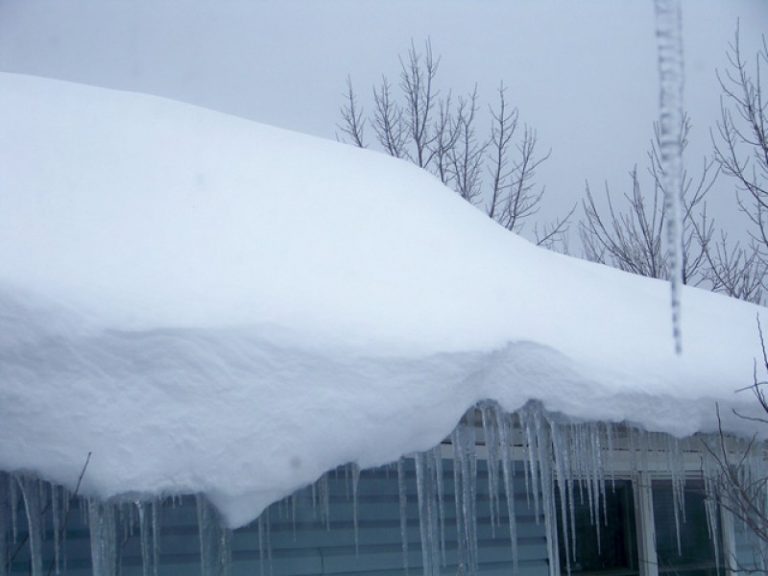 Estimate How Much the Snow on Your Roof Weighs

Using these guidelines from The Insurance Institute for Business & Home Safety you can use the following to see if your roof is supporting too much snow and ice weight:

Snow Removal May be Necessary to Avoid Roof Collapse

“If you are in the “danger zone” …or if the loads you estimate based on the thickness of the various types of snow and ice exceed 20–25 psf, you should consider removing snow from your roof. For safe removal that won’t endanger you or damage your roof, use a snow rake with a long extension arm that will allow you to remove the snow while standing on the ground or hire a snow removal contractor” (Disaster Safety). The risk of snow and ice accumulation and the danger it poses to your roofing system is not something to ignore or take lightly. A roof collapse is a serious event and can lead to loss of property and possessions and can even result in loss of life!  It is not a risk that you should take!

To get the best wintertime roofing care and to find out more about what you can do to reduce your risk of snow and ice accumulation this season, contact us today!  Stay Dry Roofing is ready to help you with all of your roofing needs and now is the time to have your roof inspected and damage dealt with before the winter chill sets in and the snow and ice begin to accumulate. Contact our team now for a consultation appointment and to learn more about protecting your roofing system from snow and ice damage this winter!